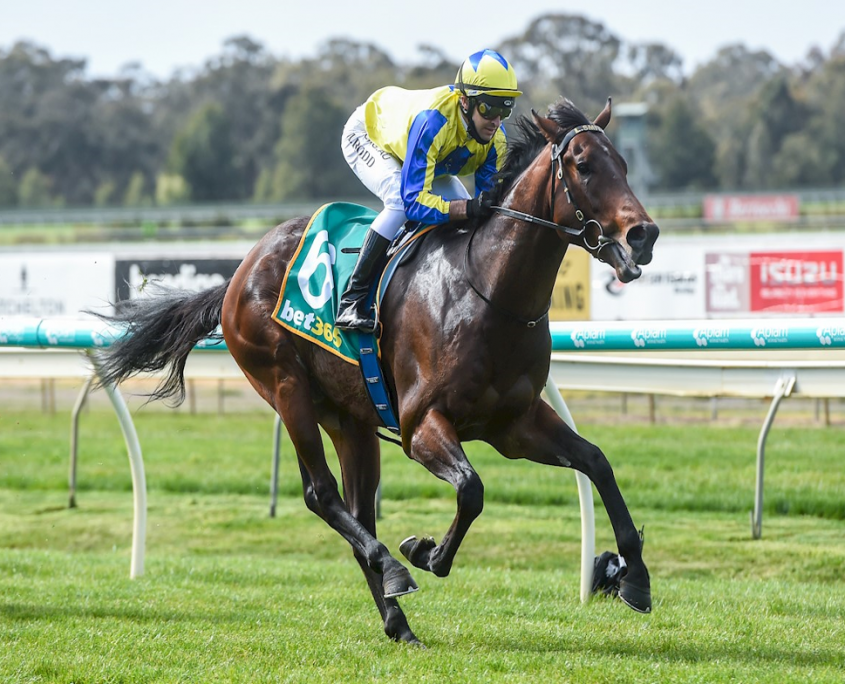 After two progressive performances on provincial tracks, exciting Spicer Thoroughbreds purchase, Tydeus, will get his chance to graduate to the metropolitan area on September 12 at Flemington.

Named after a Greek warrior, Tydeus has been all-conquering so far with a devastating victory in a Warrnambool maiden last month.

Then, when produced in midweek metropolitan standard bench mark 64 event at Bendigo, he had something in reserve and proved there was no element of fluke about his debut performance.

Orphaned at birth, his dam – Elsedina – having developed laminitis during her pregnancy, the son of Written Tycoon had a highland pony as a foster mother. The pony lost her foal but quickly took to her adopted.

The mild-mannered colt has attracted interest from Hong Kong. Brad Spicer has always been a fan of the three-year-old and conceded there is an emotional attachment.

Given the promise shown, Spicer has told those interested to buy Tydeus that it would require a more substantial offer to see connections part with the lightly-raced galloper

“We received a six-figure offer after he won a trial. The phone rang straight after the Bendigo win but he will continue to race in Australia for now.” Spicer said.

Bought for $50,000 at the 2019 Inglis Melbourne Premier yearling sale, Tydeus has already returned his purchase price.

Such is the regard Spicer, trainer Lindsey Smith and jockey Michael Rodd have for Tydeus that the horse will head to the Group 2 Danehill Stakes (1200m), provided he continues to please in his trackwork.

When he won at Warrnambool, Tydeus handled heavy condition but he was equally adept on a good surface at Bendigo.

,”He’s a beautiful horse to deal with and let’s hope he makes it all the way to the top,” Smith said.