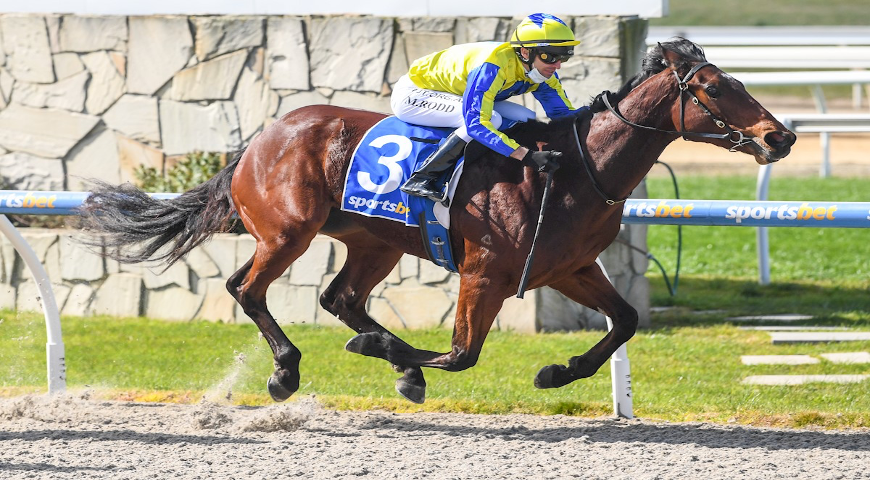 Frederick The Dane is likely to chase the huge Super VOBIS dollars on offer later in the season after establishing himself as a winner for the large group of women that own him on Friday at Pakenham’s synthetic track.

Bought at the 2018 Adelaide Magic Millions yearling sale, the well-named son of Danerich out of Street Princess had been building up to a win following second placings at his two runs back from a spell.

Jockey Michael Rodd, who is building a great rapport with Spicer Thoroughbreds – having won on Mystery Shot and Tydeus in recent weeks – rode a heady race from a wide barrier.

Frederick The Dane began well and cruised across to sit outside the leader before applying pressure and moving on by before turning into the home straight. Rodd put the three-year-old gelding through his gears and stretched his lead appreciably, maintaining a clear length on his nearest rival at the winning post.

Brad Spicer explained that the handsome, big unit was still a baby mentally the best lies ahead of the horse that he anticipates will delight the owners for years to come.

“He was a pretty expensive Danerich lot but he was an outstanding yearling that we pretty much had to buy. We bought him with the Gold Coast race in mind, but he was a little slow maturing,” Spicer said.

“Our boy is still a bit soft mentally, a bit of a baby but we’ll look for an easy race to target with a view to building his confidence.

“The he can have a short break and be back in the summer to gobble up some of the Super VOBIS bonuses,” he said.

“I think the form out of the race will hold up.  There was a rap on the runner-up Raazou and the third placegetter had gone well in a jump-out at Flemington down the straight.”