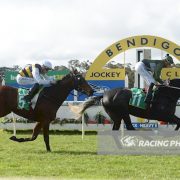 Well that was fantastic to see today as she really showed us a glimpse of what the future looks like with a convincing win. Although it was only a maiden she was pretty arrogant today as Mick Dee only asked her for a minor effort and she responded well before Mick took hold 100 meters from the post.

Mick said it was a really soft win today as we could of won by 3-4 lengths if we had wanted to, and that gear change with the step up in distance really saw a much better turn of foot.

Mick said she can step up into a 2400 meter race now and hopefully put 2 on end.

Tweets by @SpicerTbreds
All Too Handy Video Update